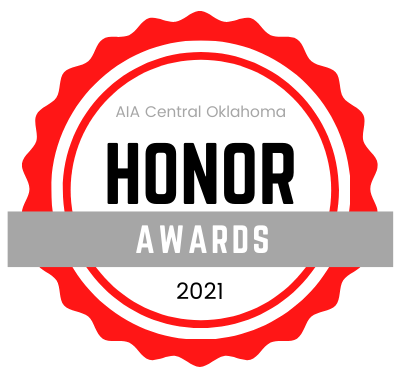 The AIA Central Oklahoma Honor Awards program honors individuals, firms and/or organizations that have contributed to the betterment of the architecture profession and the built environment.  The Honor Awards Luncheon is held during Architecture Week on Friday, October 15th at Will Rogers Theatre.

The Awards Committee will evaluate all nominations received by Friday, September 3, 2021 and select awards only in those categories for which qualified nominees are submitted.  Awards will be determined by democratic majority vote of the Awards committee, and all decisions are final.  The Honor Awards are to be presented at the AIA Central Oklahoma Honor Awards Luncheon during Architecture Week on Friday, October 15th at Will Rogers Theatre.

The William Wayne Caudill Award – for Outstanding Member
William Wayne Caudill, FAIA was the only Oklahoma born and Oklahoma educated architect to win the AIA Gold Medal Award. As Caudill symbolized the complete architect in being an innovator, educator, practitioner, leader and compassionate architect; it seems fitting that this award should bear his name.

This category is meant to recognize and honor an individual AIA Central Oklahoma member who has displayed a long-standing commitment to the betterment of the profession and the well-being of architects in the region, and who has dedicated extraordinary time and talent to this end.

The Solomon Andrew Layton Award- Firm of the Year
Solomon Andrew Layton (1864-1943) the most noted architect of early-day Oklahoma City created designs for many of the States’ most notable structures including buildings that still remain today; the Braniff Building, the Medical Arts Building, the Skirvin Hotel and the Oklahoma State Capitol Building, one of his outstanding works.  His efforts in creating lasting Architecture for the community best exemplify the qualities of his award.

To recognize an architectural or architectural/engineering firm, or individual practitioner which, has distinguished itself over the past five years, to the betterment of the profession and community, through leadership, vision and design.

The Keystone Award
As long as arches have been a part of architectural vernacular, they have required the placement of the keystone (the top stone or brick at the peak of the arch) to make the arch element realize its full potential.

We will give this award to recognize a general contracting firm, a building subcontracting firm, a tradesman, or an industry supplier which has displayed a consistent level of quality in their area of practice that exceeds normal standards, and elevates the creative design of the architect by cooperation and skill.

B.H. Prasad Honorary Award
B.H. Prasad was a longtime supporter and friend of the architectural profession.  He showed his commitment to the architects through his work at OG&E and through his many contributions to the AIA Central Oklahoma Chapter.  B.H. unselfishly gave his time, energy and resources to the betterment of the profession.

Presented to individuals, businesses or organizations within and outside the profession who, through dedication of time, talent and resources have contributed to the betterment of the architectural profession, the community and the built environment.

Robert M. Lawrence Volunteer Award
Robert M. Lawrence, FAIA was a long-standing member and past president of AIA Central Oklahoma.  In addition, Robert is the only member in the state to serve as National AIA President, which he did in 1983.  Robert gave so much of his time and talent to the American Institute of Architects.

Awarded to an individual AIA COC member or non-member who has exemplified the unselfishness of volunteering of his/her time and talents to promote the programs of the AIA COC throughout the past year.